When registration closes, Nora will send you a Google doc with all team info including player emails.

After registration closes, send an email on Wednesday to all teams with the following information:

We want more pool play games to be able to be played to 21. We are aiming for pools of 5 - 6 teams with games to 21 and a cap at 25. Based on the number of registrants this is not always possible. In cases where we need to make pools of 7 or 8, games will be played 15 with a cap at 21.

Pools should be made with snaked seeding. If you have 15 teams for your Sectional, you will want 3 pools of 5. Begin by making a list of all known teams based on skill level. For the known teams, the school they are playing for should not be taken into consideration when listing by skill. After you have snaked all of the known teams, you can then fill the pools with other teams based on school - aka don’t put all of UTC in one pool.

Giving teams a defined order to play their games is very helpful to make sure tournaments run smoothly.

Make sure all teams have arrived and you are aware of which teams make up each Squad for the Club Bracket.

The top squad must have 3 teams, following squads can have 2.

Squads cannot be changed once the individual tournament begins. You can refer to Squads by color, number, letter, etc. (UCLA Blue, UCLA Yellow). 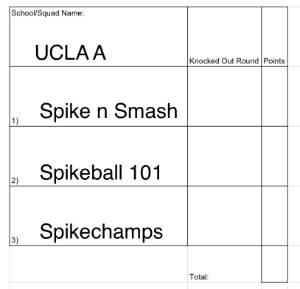 Teams are seeded based off win/loss, point differential, head to head, coin flip. If there are pools of different sizes you need to consider the win % rather than just the number of wins for seeding. Also make adjustment to point differential (i.e. 56 points in pool of 8 vs. 56 points in pool of 7 - adjust 56 for pool of 8 divided by 8 times 7 = 49 points.)

The Club bracket will consist of 2-3 individual teams that compete together as a Squad.

Use the Squad Sheet completed at check-in (see above) to track this as teams are eliminated from the Individual Bracket. 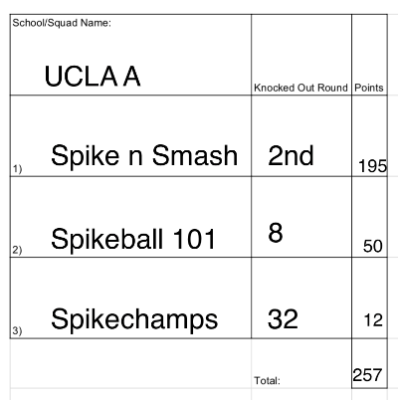 The order of the individual teams as part of the squad will be determined by the placement of the teams in Individual Bracket play.

The matchups in the Club Bracket will put the squads’ 3 teams (1v1 2v2 3v3) against the other squads’ 3 teams. The Squad that wins 2 out of the 3 matches continues on to the next round of the bracket.

*If 1st place Individual team is part of the a jersey winning college club, Savage custom jerseys will fall to the highest placing club that did not receive jerseys as prizes