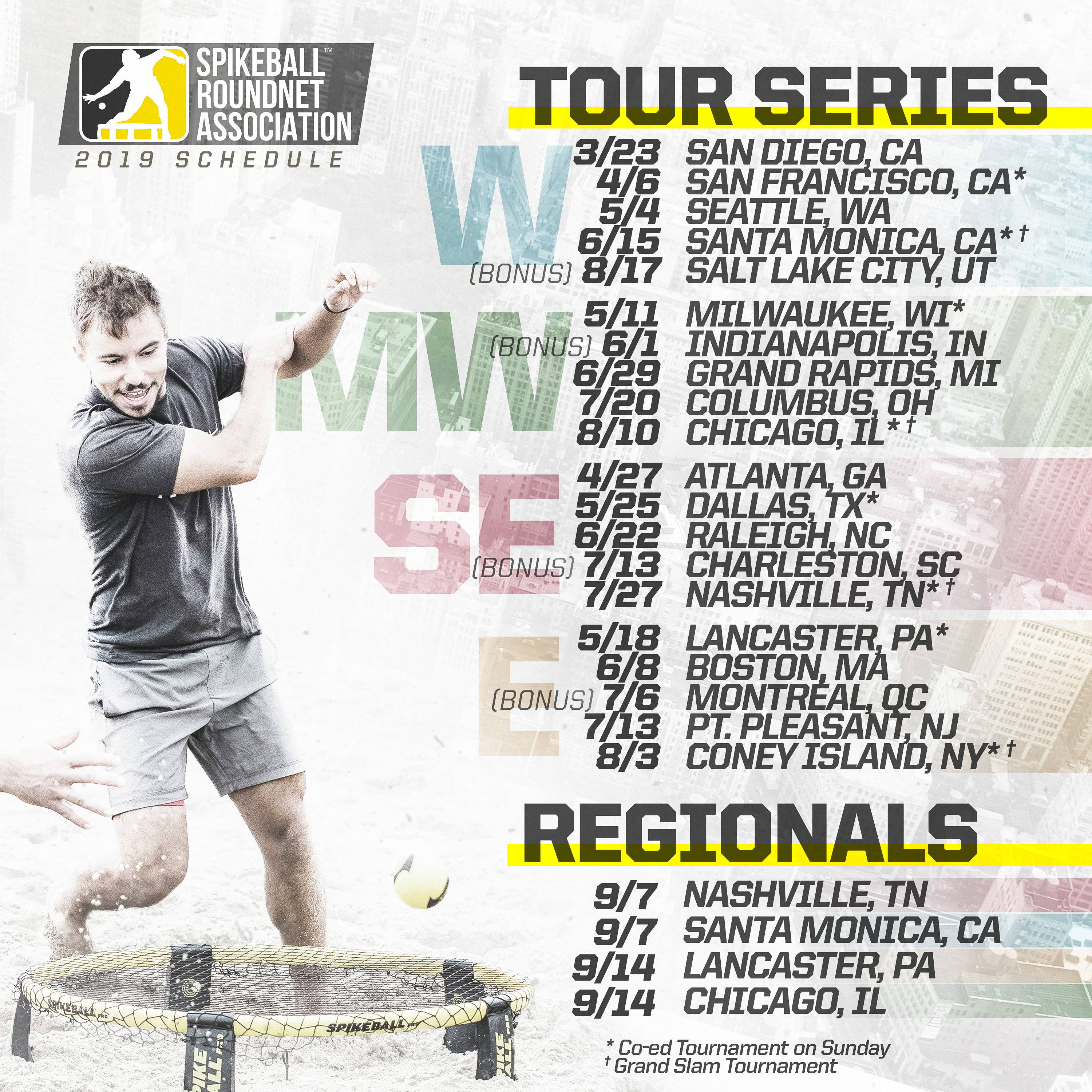 The 2019 Tour Series will consist of 3 Tour Stops and a Grand Slam in each region. Each region will also receive an additional Bonus Tour Stop. Bonus Tour Stops will be run independently by local roundnet leaders giving us the ability to bring quality events to high potential areas. Prizes and points will be awarded in the same manner of traditional sanctioned events.

The 2019 season will again include a number of two-day events, where Sunday features a coed tournament. In addition to the coed tournament, we are also going to use Sundays as an opportunity to test new rule and equipment modifications in a tournament setting.

Registration for tournaments will will open roughly two months before the tournament date and will be listed under the 'Events' tab above as well as posted on Spikeball's social media platforms.

All 2019 sanctioned events will include a Premier and Women’s division (as long as there are at least 8 teams signed up). Grand Slam events with at least 16 premier teams will have a Pro Division for the top 8 teams.

We want more pool play games to be able to be played to 21. We are aiming for pools of 5 - 6 teams with games to 21 and a cap at 25. Based on the number of registrants this is not always possible. In cases where we need to make pools of 7 or 8, games will be played 15 with a cap at 21. If there is a mix between pool sizes within a division (ie there's a pool of 6 and a pool of 7) games will be played to 15 with a cap at 21. See example.

We will be using single elimination for all brackets and playing out for more places. If you lose in the first or second round you’ll automatically drop into a feed-in consolation bracket. As such, every team will be guaranteed at least two bracket play matches.

The Premier and Women’s division will utilize an objective, points-based seeding system in 2019. We will calculate individual ranking points for each player. The sum of a teams’ individual points will be used for seeding purposes. At this time, there is not enough data from other divisions to make this format work accurately, though we will take any objective data available into consideration when seeding.

Players receive 50% of the points their teams’ earned in the 2018 season. Players’ points are valid for a 12-month span and are subject to an exponential decay with a half-life of 6 months.

Let’s say your team earned 50 points for reaching the quarterfinals of a Tour Stop in 2018. From that event, you get 25 points toward your rank and your partner gets 25 points. That part’s pretty simple.

Regardless of your teammate, points count toward your rank, so you don’t have to be playing with your permanent teammate to earn points for yourself. After 12-months, points no longer count.

Check out points for all possible multipliers here.

Tournaments have varying degrees of difficulty based on the teams that participate. To make our rankings more accurate we’ve added a strength multiplier to the points system. The strength multiplier is determined by looking at the percentage of total ranking points compared to the maximum amount of points.

Women’s and Open champions (highest division) have payouts based on the number of registered teams in the respective divisions. There will be a 1.2 multiplier for Grand Slam and Regional Tournaments.

Open total teams = The sum of teams in Pro, Premier, and Advanced

Nationals will feature a Pro Division. Only 16 teams will qualify for the Pro division. The top two teams from each Regional Championship will earn a spot. If a team does not accept their bid from regionals, it will fall to the next highest placing team. Remaining spots will be determined by taking the sum of the top 5 Premier Points earned at sanctioned events (without depreciation). Ties will be broken by cumulative season points.

We are excited to add two new members to the 2019 SRA Board, the man behind Golden Gate Roundnet, Taylen Peterson, and Alli Kauffman, 3-time women's national champion and driving force of the Lancaster roundnet community. The current board consists of:

We're excited to roll out these new initiatives and believe they will help our sport continue to grow and improve. Like anything new, we know there will be some kinks to work out along the way and appreciate your support and patience as we do so. At times, we may need to make some adjustments to this outline. We also know that tournament directors need the ability to make adjustments when unique circumstances deem it necessary. We are absolutely pumped about the direction we're moving and the future of roundnet! We hope you are too!