Coronavirus Update 6/19/20:
We're bummed to announce the Tour Series isn't going to happen this year. We want to get back to playing, but we think being more cautious now will keep our communities safer and be better for everyone in the long run.
We hope to be running our Championship Series (Regionals + Nationals), given things keep moving in the right direction. Dates and locations of Regionals will be subject to change in order to find the most suitable venues based on coronavirus precautions. We will also be adjusting the structure of Regionals and Nationals to account for the cancellations. 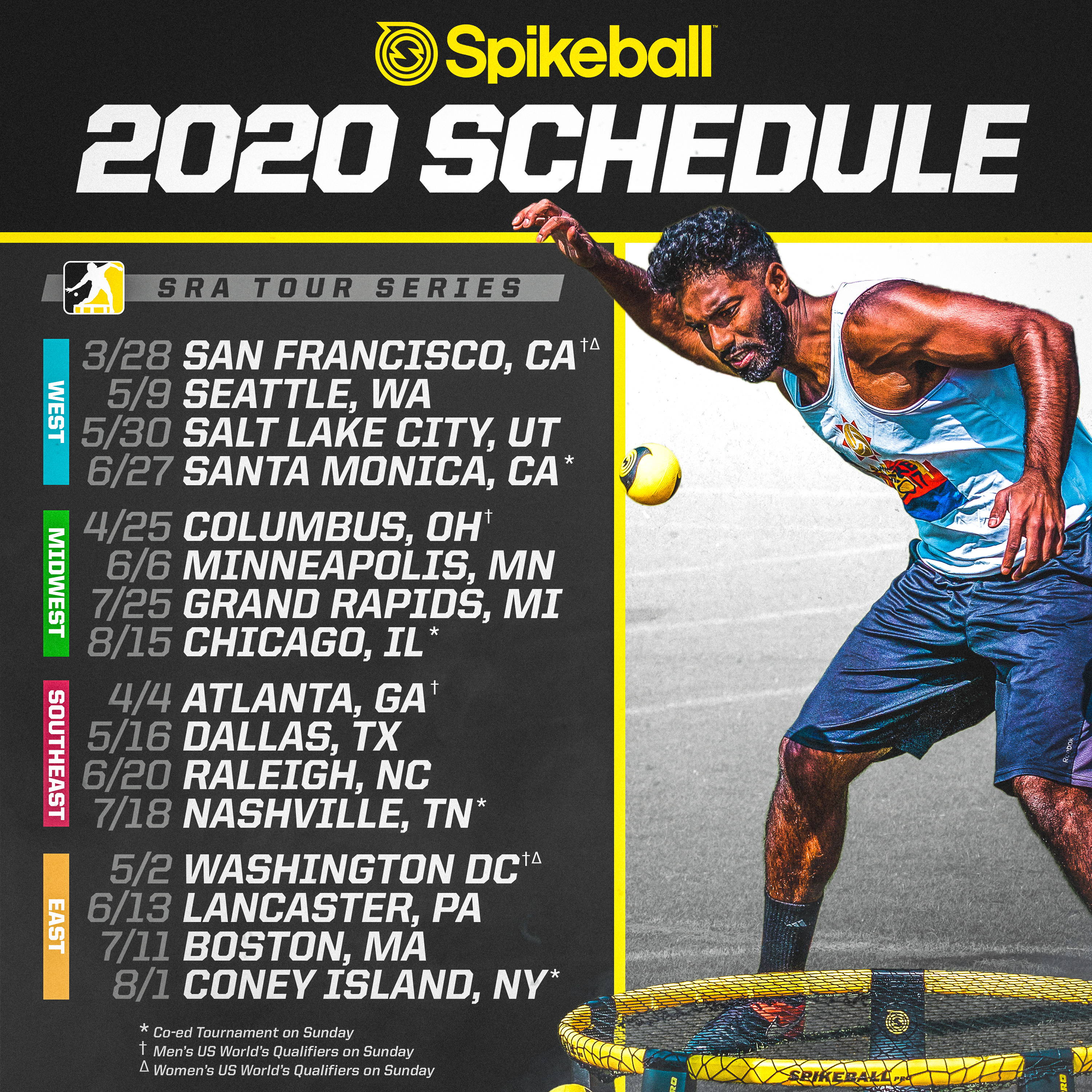 The 2020 Tour Series will consist of 3 Tour Stops and a Grand Slam in each region. Select Tour Stops will be run independently by local roundnet leaders (aka Bonus Tour Stops). This format helps to test out new, promising locations. It also means that the local organizers will gain skills and experience to keep the community thriving after the tournament is over.

Registration for tournaments will will open roughly two months before the tournament date and will be listed under the 'Events' tab above as well as posted on Spikeball's social media platforms.

All 2020 sanctioned events will include a Premier and Women’s division (as long as there are at least 8 teams signed up). With the growing number of new players, we will also be testing a beginner division to make sure that players of all skills can find the right level of competition. Grand Slam events with at least 16 teams will have a Pro Division.

We will be using single elimination for all brackets and playing out for places. If you lose in the first or second round you’ll automatically drop into a feed-in consolation bracket. As such, every team will be guaranteed at least two bracket play matches. In the premier and women's division we will always play out for 5th place.

The Premier and Women’s division will utilize an objective, points-based seeding system. We will calculate individual ranking points for each player. The sum of each player's top 5 individual depreciated points will be used for seeding purposes. At this time, there is not enough data from other divisions to make this format work accurately, though we will take any objective data available into consideration when seeding.

Players receive 50% of the points their teams’ earned in the 2019 season. Players’ points are valid for a 12-month span and are subject to an exponential decay with a half-life of 6 months. When calculating seedings, the top 5 point values are used to represent an individual rank.

Let’s say your team earned 50 points for reaching the quarterfinals of a Tour Stop in 2019. From that event, you get 25 points toward your rank and your partner gets 25 points. That part’s pretty simple.

Regardless of your teammate, points count toward your rank, so you don’t have to be playing with your permanent teammate to earn points for yourself. Your rank is based on the top 5 point values earned within a 12-month period. After 12-months, points no longer count.

The number of premier teams registered for a Grand Slam will determine the size and format of the Pro Division.

For the Pro Division we look at:

There will be two distinct points systems. The Advanced system will track points earned at independent tournaments and in the advanced division of sanctioned Spikeball tournaments. The Premier system will track points earned at sanctioned events in the Premier and Women’s division. A limited number of independent tournaments hosted by Recognized Roundnet Organizations will also be eligible to earn Premier points. The SRA will work with RROs and post which events are eligible for premier points.

There will be cash prizes for the top division in Women’s and Open at Grand Slam Tournaments, Regionals, and Nationals based on the number of teams in the respective divisions.

Nationals will feature a Pro Division. Only 16 teams will qualify for the Pro division. The top two teams from each Regional Championship will earn a spot. If a team does not accept their bid from regionals, it will fall to the next highest placing team. Remaining spots will be determined by taking the sum of the top 5 Premier Points earned at sanctioned events (without depreciation). Ties will be broken by cumulative season points.

The current board consists of:

We're excited to roll out these new initiatives and believe they will help our sport continue to grow and improve. If you're interested in the thought process behind these updates, click here for a little more info about our goals and rationale. Like anything new, we know there will be some kinks to work out along the way and appreciate your support and patience as we do so. At times, we may need to make some adjustments to this outline. We also know that tournament directors need the ability to make adjustments when unique circumstances deem it necessary. We are absolutely pumped about the direction we're moving and the future of roundnet! We hope you are too!