To round out the 2016 season, The Rally collected superlative nominations and had members of the community vote on a number of accolades. Here are the results.

Despite their loss at 2016 Nationals, Chico Spikes kept their #1 spot on the Power Rankings throughout the entire year and earn the title of "Team of the year." In 2016, Boles and Boyer played 11 tournaments together, won eight of them, and placed second, fourth, and T-5th at the other three. 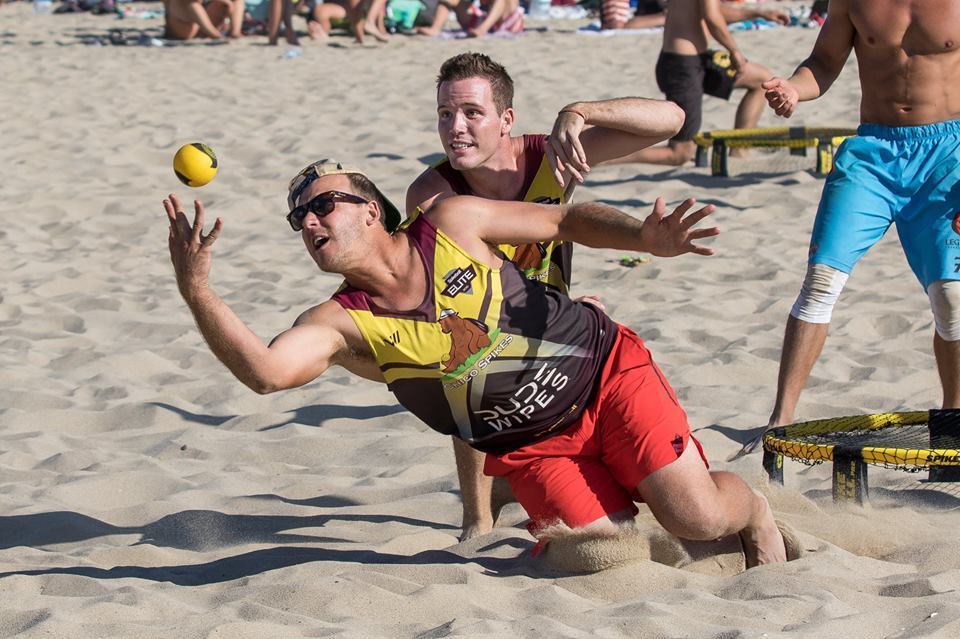 Boles and Boyer scramble for a ball at West Regionals

Most people in the roundnet community, especially those spectators who were able to witness it in person, see the 2016 Nationals Finals as the clear best and most exciting match of 2016. 2 Guys (Troy Mauk and Preston Bies) were predicted to do well at Nationals, but few projected them to win it all. Heading into the finals, the crowd was electrified by the 2 Guys v. Strange Embrace semifinal, and Chico looked vulnerable after dropping a game to Nashburgh. The electricity continued into the finals match with spectacular play by all players and a come-from-behind game one win for 2 Guys. The crowd, rallies, and eventual dethroning of Chico made this match a memorable one.

A panoramic shot of the Nationals Men's Finals

Player of the year: Skyler Boles

Along with the accolades that Boles earned as half of Chico Spikes, he also had an impressive year as a mash-up player. Boles attended five tournaments without Boyer on his side and won three of them. One of these wins was the Dallas Tour Stop with Ian Golembeski, where the pair took out Artificial Flavors, Safi, and Origin Vengeance. 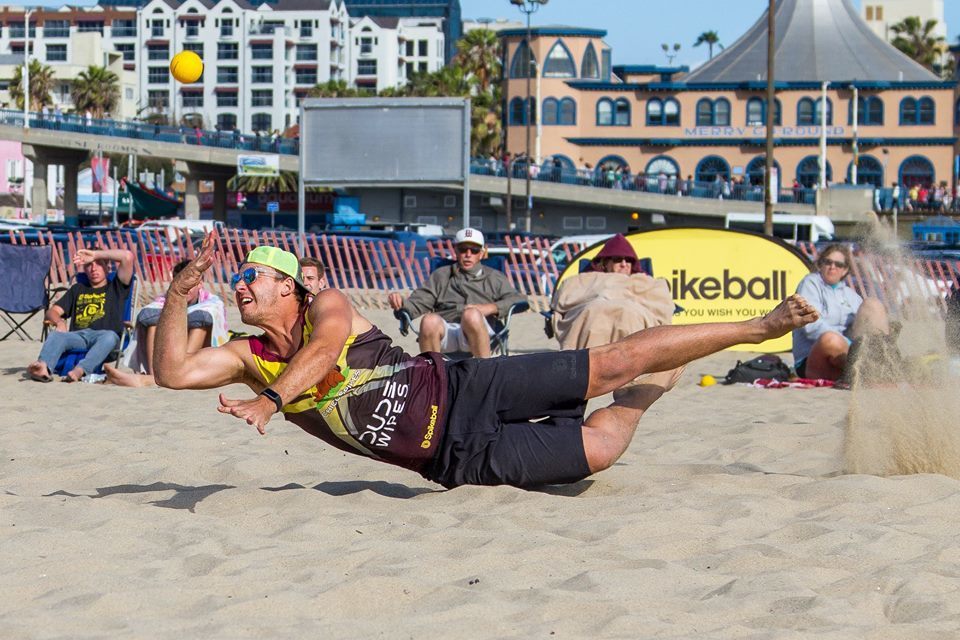 Boles diving for a ball at the Santa Monica Grand Slam

McPartland joined the roundnet scene after meeting members of Spicy Roundet Club at the University of Massachusetts Amherst. His first two tournaments came at the end of 2015, playing THE Connecticut Roundnet Bonanza with Ryan Delaney and Flurry 2015 with Liam Brennan. McPartland improved in the spring and summer and claimed top 8 spot at SummerSpike after defeating GUB with Harding Brumby. He finished off the year displaying a wide array of dominant serves and placing fifth at East Regionals with Jeff Schafer, top 16 at Nationals with Zach Zimmerman, and third at The Flurry with Boles. 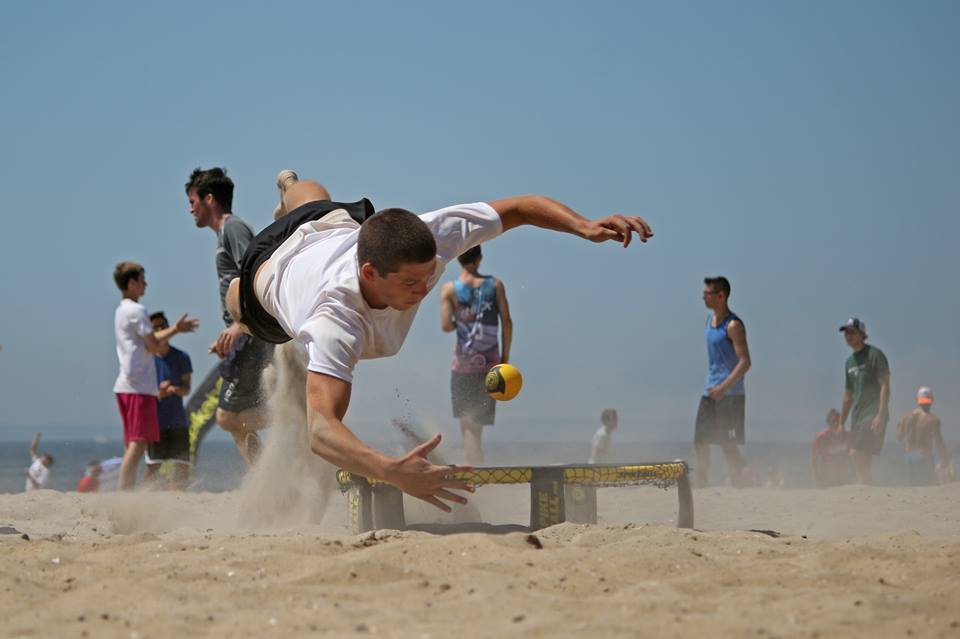 McPartland dives for a drop shot at SummerSpike 2016

Voting ended in a tie for "Breakout team of the year" and both teams deserve the title. Troy Mauk has been on the scene for quite some time and was a Spikeball® Elite member in 2015. Preston Bies, however, was lesser known outside the West Coast. There was much hype surrounding 2 Guys before their first major tournament, the Santa Monica Grand Slam, and losing to Origin Vengeance in the quarterfinals was not a bad showing. On the season, 2 Guys' only bracket losses came from Origin Vengeance (Santa Monica, Atlanta) and Chico (West Regionals).

Origin Chaos (known as Chi-Beria in 2015), composed of Matt Bohnen and Ryan Weiler, went out in the round of 64 at 2015 Nationals but ended 2015 challenging the East Regionals third place finisher Spicy Dirt at THE Connecticut Roundnet Bonanza. Bohnen and Weiler then joined Origin Roundnet Club and began to improve rapidly. Their first notable win came over The Rookies at the Atlanta Grand Slam and later they became one of six teams to win a 2016 tour stop.

Both teams will be staying together for the 2017 season. 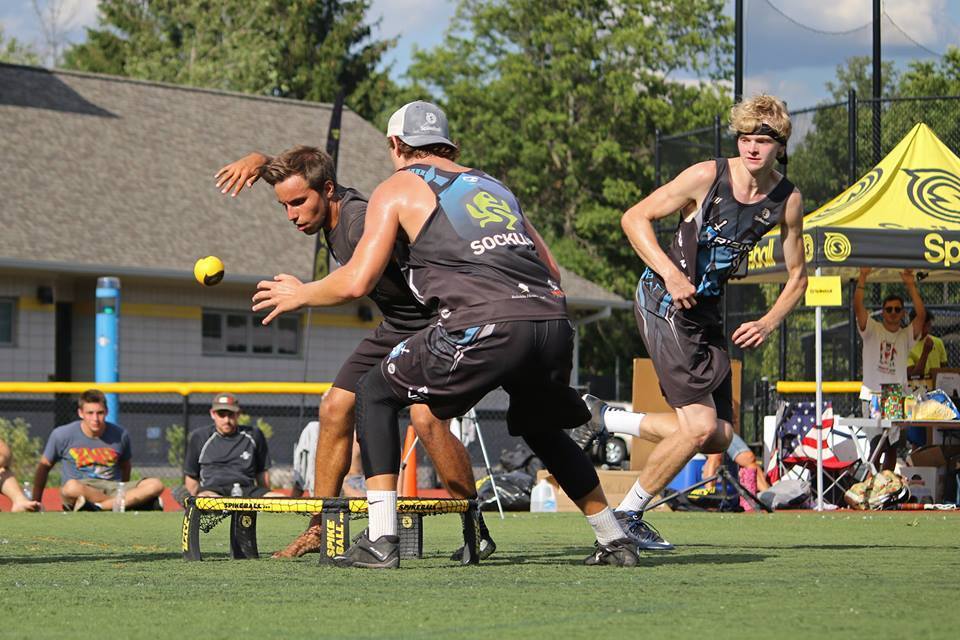 Bohnen and Weiler set for defense at the Boston Grand Slam

The two roundnet retirees rightfully earned the title of mash-up team of the year with their impressive win at The Flurry. Fogarty and Boyer never lost a set, although many teams sent them to game 3. To take first at the most competitive mash-up tourney in history, Slurp took out Jarratt Rouse and Tyler Cisek, Skyler Boles and Daniel McPartland, Ian Golembeski and Patrick Drucker, Kit Ryan and Cam Cisek, Preston Bies and Bryce Johnson, and Nick Sant and Mike Zagone. 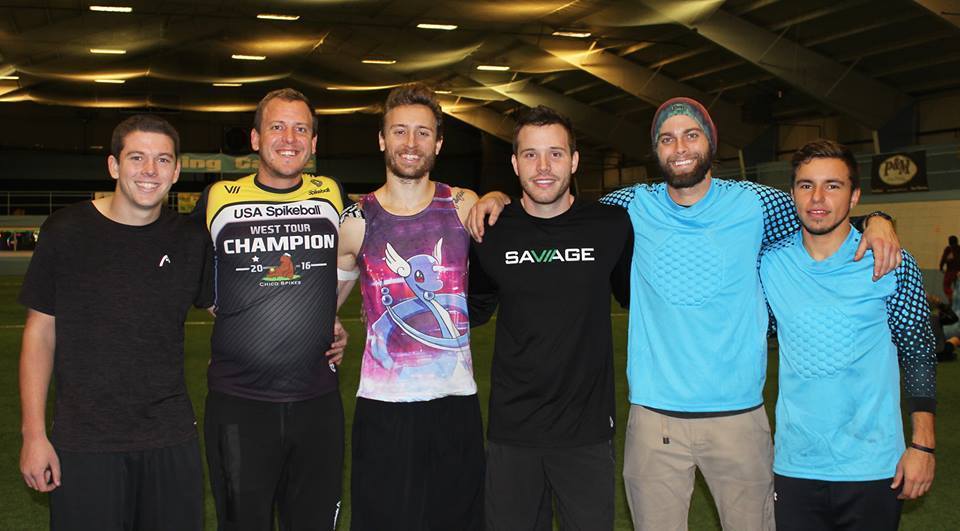 Mauk embodied hustle against Chico Spikes in the finals and his consecutive aces to seal game one of the finals is one of the most impressive moments from the season. His clutch factor in the semifinals against Strange Embrace was crucial in the 45-43 marathon game two. Two times in extra points, 2 Guys was broken and faced elimination. In both instances,  they hold on the next point, and Mauk tallied an ace to regain the advantage. 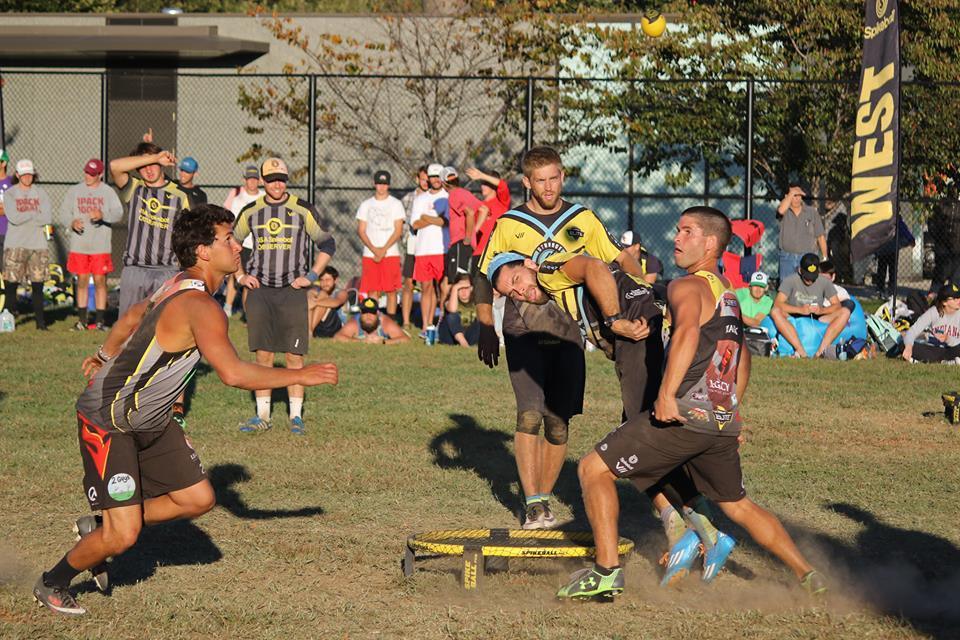 Bies and Mauk react to a ball in the Nationals Semifinal

Rivalry of the year: Nashburgh v. The Rookies

Upset of the year: Origin Force over Origin Vengeance at Nationals

With the exception of Chris Hornacek's injury in February, Origin Vengeance was #2 or #3 on the Power Rankings for the duration of the season. Force entered Nationals ranked #17 and shocked everyone when they became the first Origin team to defeat Vengeance in bracket play.

In early September, there seemed to be a battle between Ogres Heroes and Origin XX for who was the most dominant women's team in the sport. It took just a month and a half for Ogres Heroes to end that discussion. Ogres Heroes captured East Regionals easily before going 5-0 against Origin XX at Midwest Regionals, going three games with power-ranked men's team Gock City, and winning the 2016 National Championship to cement their place.

After upsetting Origin XX in the semifinals, Shewolves (Jenna Coleman and Sam Calisto) were ready for the biggest stage against the dominance of Ogres Heroes. Despite never playing together in a tournament, Shewolves put up a valiant effort in a championship match that had several long rallies between arguably the best four players in the women's division. Even though some of the best men's teams were fighting for their own championship right next door, a huge portion of the crowd was glued to the women's final, adding drama to an already intense match. 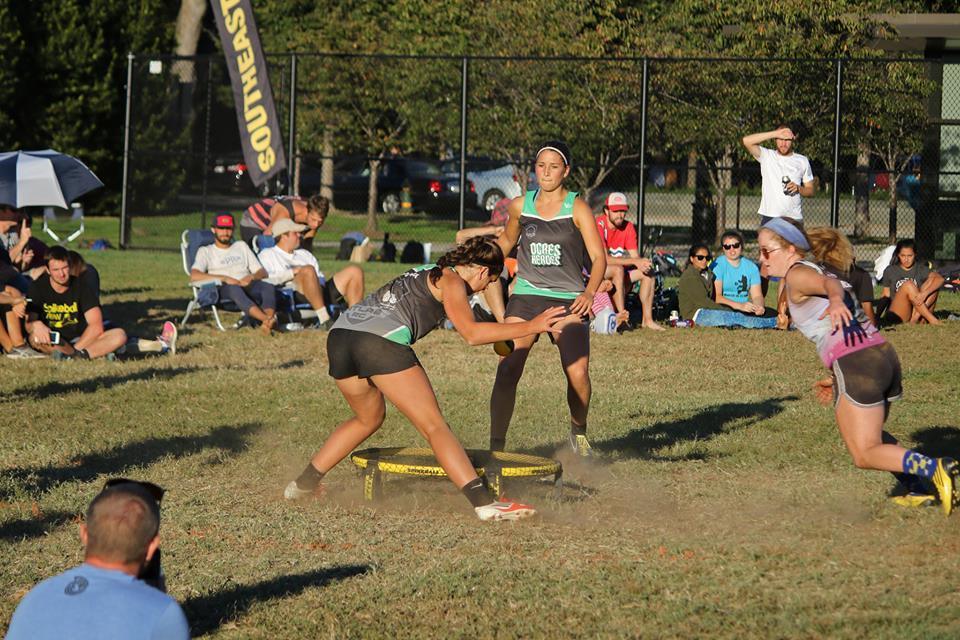 Kaufman sets to hit a ball in the Nationals Final

Player of the year: Becca Witmer

Witmer was the driving force behind the most dominant women's team in 2016, Ogres Heroes. Her calm yet intense demeanor guided her team to the East and Midwest Regional titles as well as the 2016 National Championship. One of the most focused players in the women's circuit, her fundamentals and consistency were unmatched by any other player. 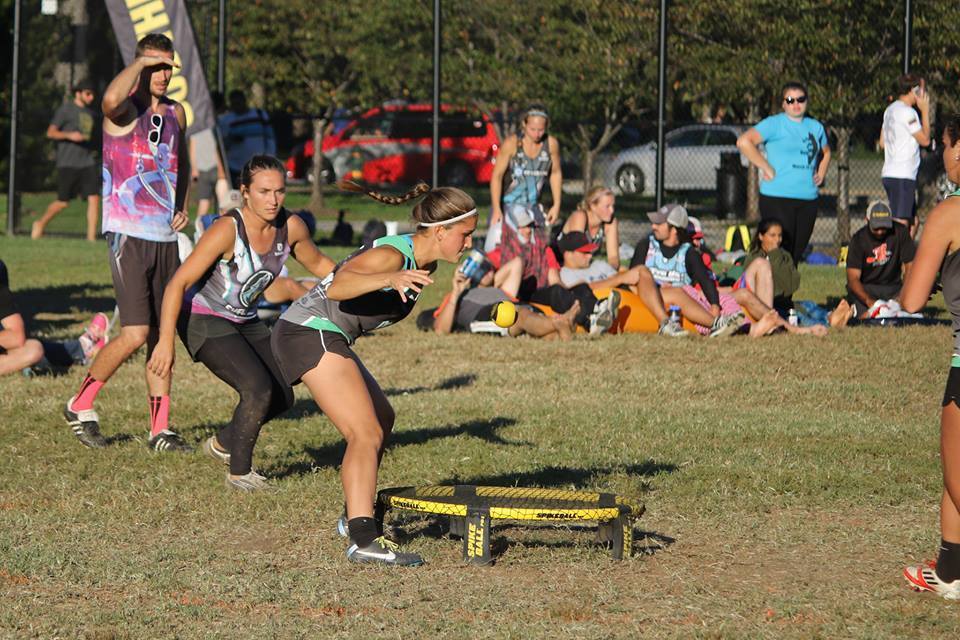 It happened quickly, suddenly, and... loudly. Tori Farlow made her national debut in the biggest tournament of the year and made a name for herself with her intensity, communication, and solid play at 2016 Nationals. In guiding veinte hamburguesas to a third place finish, Farlow showed roundnet skills and general athleticism that had yet to be seen in the women's division. She followed up Nationals with an impressive third place finish with Molly McCauley at The Flurry. All of a sudden, Farlow became one of the top female athletes in the game.

Just when you thought that 2016 Nationals was a three-horse race, in comes this duo from the Southeast. The quiet, mild-mannered Charissa Wright and the intense, athletic Tori Farlow made for a surprising 1-2 punch in their first ever women's division appearance. After playing Ogres Heroes much tighter than other teams in the semifinals, veinte hamburguesas stunned Origin XX in the third place game to push one of the national favorites to a disappointing fourth place finish. 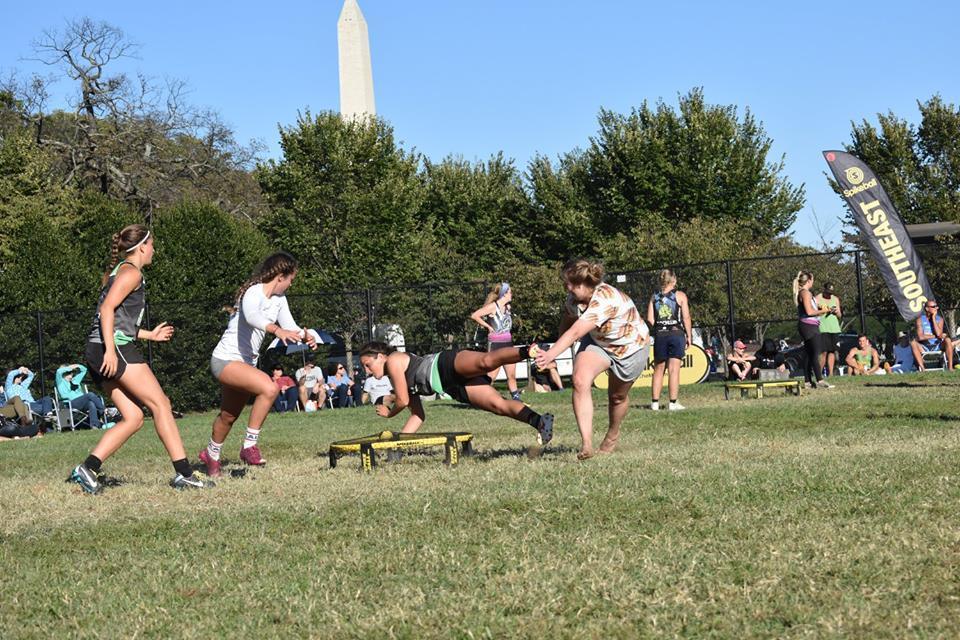 Teaming up for The Flurry in December, Coleman and Haselton overpowered opponents with serves and forgave few hitting errors. They won the winners bracket and narrowly dropped game one of the grand finals to Becca Witmer and Charissa Wright before buckling down and winning the series in three games. 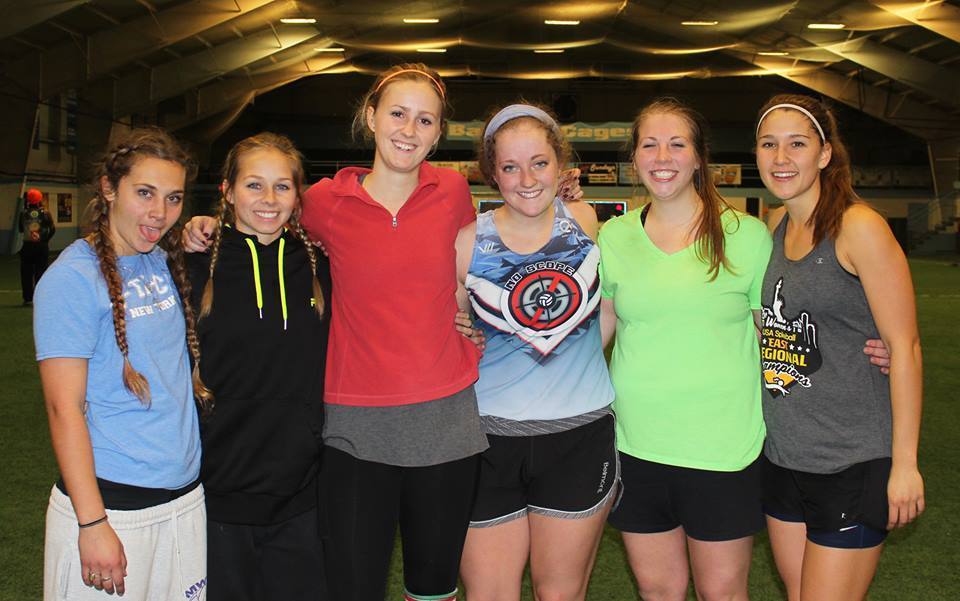 Jenna captured both the Co-ed and Women's divisions at Birch Hill in June with teammates Skyler Boles and Alli Heck, respectively. Along the way, she took down top ranked men's and women's players, including Ogres Heroes in the women's finals. 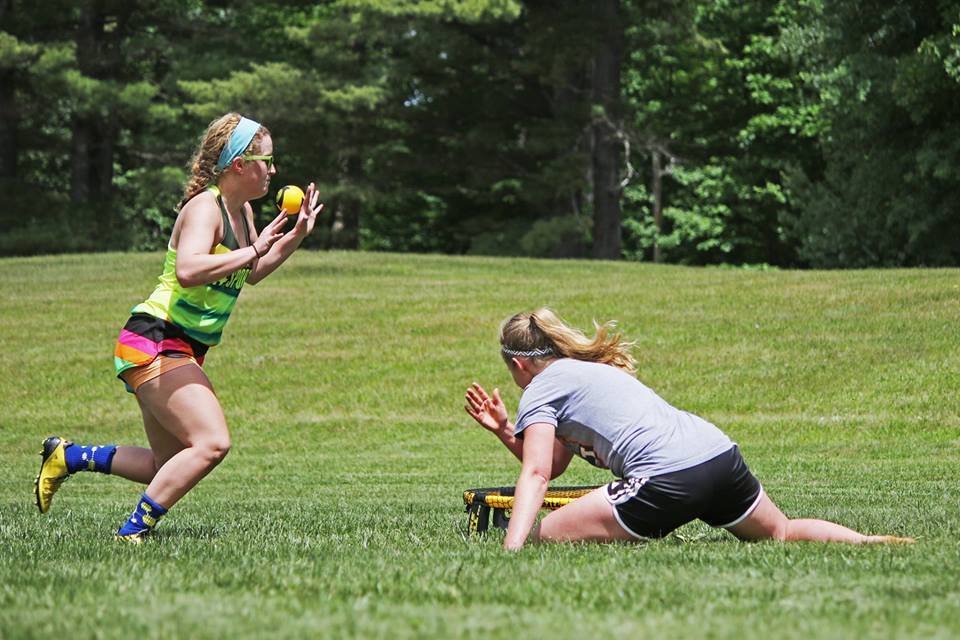 Coleman charges at a ball at Camp Birch Hill

After earning the #1 seed in pool play, Ogres Heroes took down veinte hamburguesas in the semifinals and Shewolves in the finals to cap off a dominant season.

Ogres Heroes and Origin XX were vital the to growth of women's play this year. After Ogres Heroes won the East Regional and XX won the West, all eyes were on the Midwest Regional Women's finals. Ogres Heroes beat XX on its home sand, and it's safe to conclude that the 2017 season will only garner more talent and excitement.

Upset of the year: viente hamburguesas over Origin XX at Nationals

Against two established and highly skilled players, veinte hamburguesas shocked everyone with a win over Origin XX to take third at Nationals. 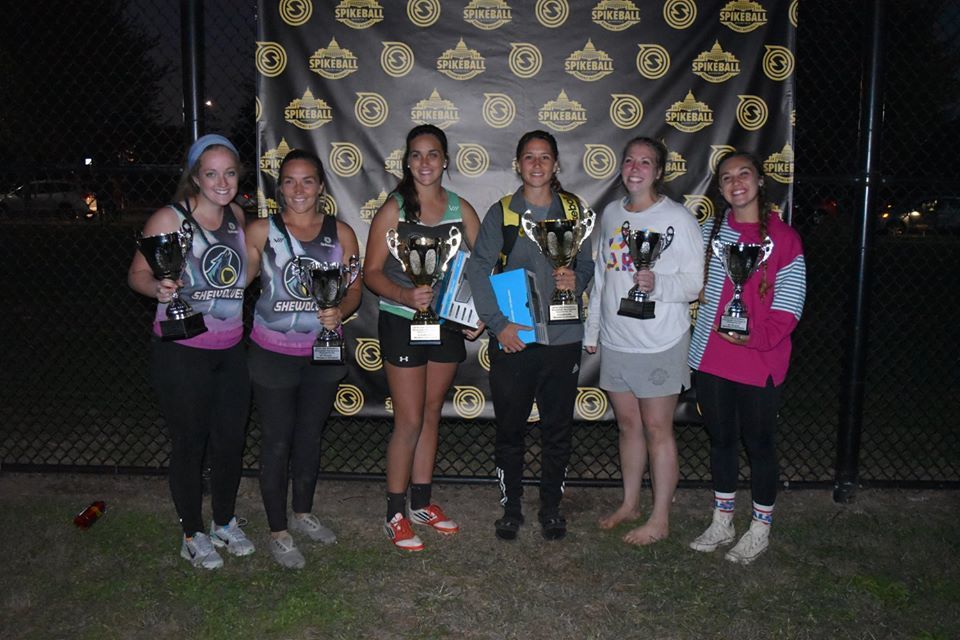 Got something related to roundnet that you want to know more about? Want to get involved writing previews or recaps for tournaments near you? Contact Mike White at mwhitey17@gmail.com.