Disclaimer: Nothing is final until Elite points are calculated after Nationals. There could be errors in the reasoning below, but I believe everything written true.

It comes as no surprise that these four have clinched Spikeball® Elite status for their 2017 season performance. They are the only teams to win multiple SRA sanctioned events (Cisek/Showalter: 7, Strange Embrace: 4, Origin Impact: 3, Anchored LI: 2).

This marks the fourth consecutive season as Elite for Cisek and Fitzgerald who earned it together as The Rookies the last three seasons.

Hornacek repeats after a dominant season last year on Origin Vengeance, and Drucker regains Elite after barely missing it two years in a row. Drucker previously earned it by making quarterfinals at 2014 Nationals as part of V2.

Anthony Alvino is earning Spikeball® Elite for the first time. He came close at 2015 Nationals while part of MickGinny; after beating Creamcycle and Bear Necessities he lost a three game series to Strange Embrace in the round of 16.

While a Top 4 finish is needed to guarantee Elite, making Quarterfinals should be enough (pending no team outside the current top 10 standings, places Top 4). While a Quarterfinals appearance is well in range for both these teams, it seems far more likely for Golden Set. Missing Regionals was a huge set back in reaching Elite, but if they play as they have all season, they should finish at least Top 8 and earn Elite.

Bolivia is in a slightly different position. After a strong May and June, they looked shaky in Boston. Their third place finish at Southeast Regionals was a bit of a disappointment, and now they'll need to find their early season form to earn Elite. Because their Top 4 scores are better than Golden Set, 2 Guys, and Point Loma, there is a narrow path for them to still earn Elite with a Round of 16 exit. But, a Quarterfinals berth will all but secure it.

A Top 4 finish will get these teams Elite, but because their current top 4 tournament result points are lower than Bolivia, Golden Set, and Easily Dug these teams are in a tougher spot.

2 Guys is just ahead of Point Loma which could make a big difference. With Bud n' Boles expected to jump up the rankings, at least one of these teams could miss out on Elite. The other team to worry about is Easily Dug. If 2 Guys and Easily Dug both exit in Quarterfinals, Easily Dug will be ahead in Elite points.

Anything less than a 4th place finish puts Point Loma's status out of their control. A Round of 16 exit will make Elite nearly impossible, but finishing Top 8 will make for a tight squeeze.

For now, assume Point Loma loses in quarterfinals and explore some possibilities. If Bud n' Boles finishes Top 4, Point Loma will need two of Easily Dug, 2 Guys, Bolivia, and Golden Set to lose in Round of 16 or earlier. And that's also assuming nobody from the "Long Shots" finishes Top 2.

However, if Bud n' Boles exits in Quarterfinals or earlier, Point Loma will earn Elite if at least one of Easily Dug, 2 Guys, Bolivia, and Golden Set loses in Round of 16 or earlier.

Easily can make it

Easily Dug got an impactful boost in points with their 1st place finish at Southeast Regionals. They will clinch Elite with a Top 4 finish, but Quarterfinals may be enough. It will unfortunately depend on the performance of the four teams just ahead of them.

Currently, their top four tournament result points are better than both 2 Guys and Point Loma. So if Easily Dug makes quarterfinals and equals or bests 2 Guys' finish, they'll jump them in Elite points. The same is true for Easily Dug beating out Point Loma.

Bud n' Boles needs a Top 4 finish to make Elite. Anything less than this would already be a disappointment, so expect Boles to join Cisek and Fitzgerald as the only players to earn Spikeball® Elite four years in-a-row. Hammon, meanwhile, will look to join Drucker in regaining Elite for the first time since the 2014 season.

All of these teams would earn Spikeball®® Elite with a Top 2 finish. With a really good bracket draw this could happen, but don't count on it.

Any team technically can still earn Spikeball®® Elite by winning the tournament. But that's not going to happen.

If Nashburgh manages to pull it off they'll join Fitzgerald and Cisek (and possibly Boles) as the only players to earn Spikeball®® Elite four years running. 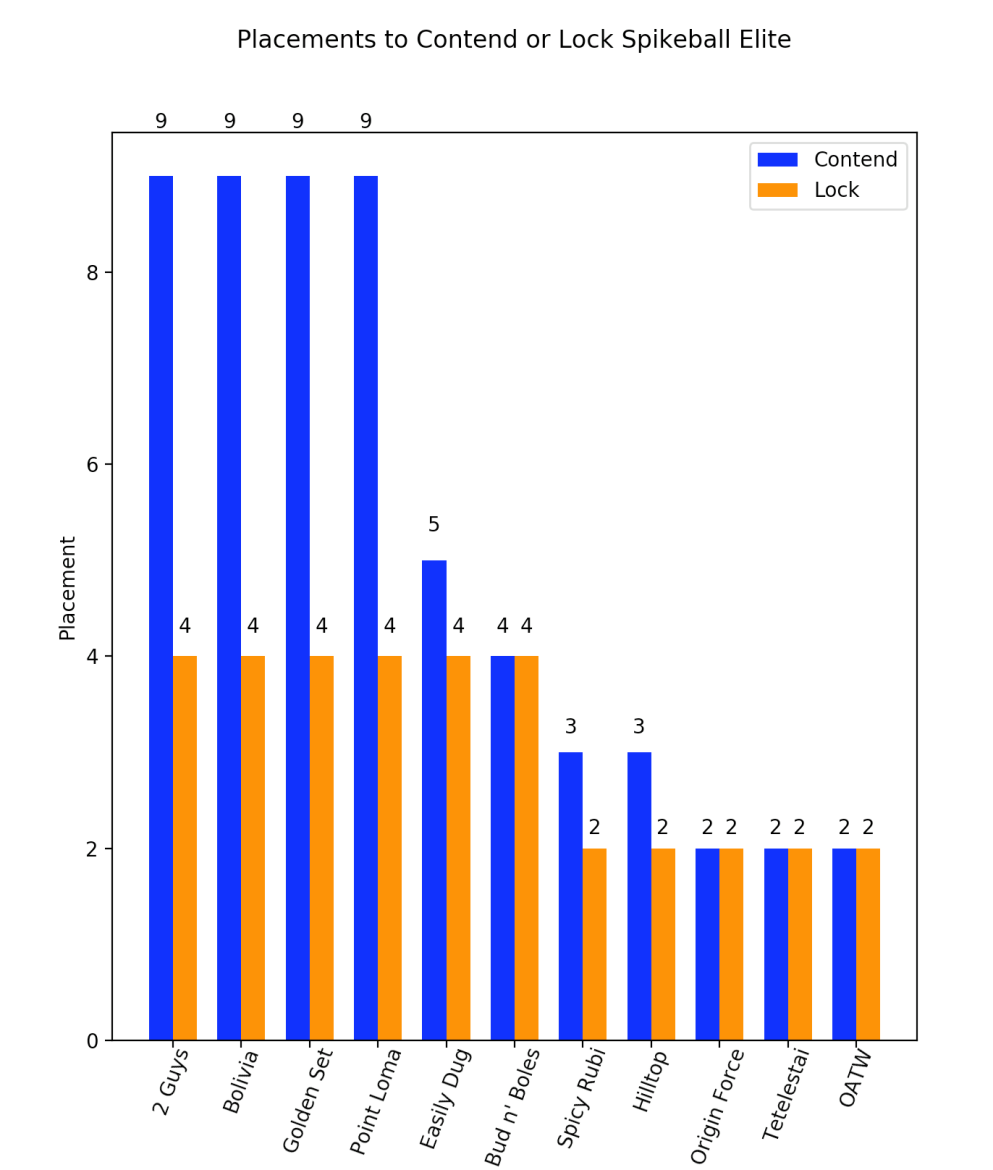 A visual representation of the Elite points race