The weekend after the Atlanta Tour Stop became the largest Southeast Tour Stop in history, the San Francisco Tour Stop tied the record for the largest West Tour Stop! With these increased numbers came a strong field of teams with 58 in the Advanced Division, 6 in the Women's Division and 50 in the Intermediate Division.

At the past two West Tour Stops, the #2 ranked Wabi Sabi (Preston Bies and Jarratt Rouse) took first place. This streak ended in San Francisco as #6 Point Loma Spike (Kenny Ortega and Zach Wood) upset Wabi Sabi in the finals to win their first Tour Stop. Intense action was also found in the Women's Division as See You on the Flip Side (Joelle Nguyen and Kayla Swayze) took first over Seattle's Doctor's Orders (Jackie Yoo and Tory White) after playing three matches! 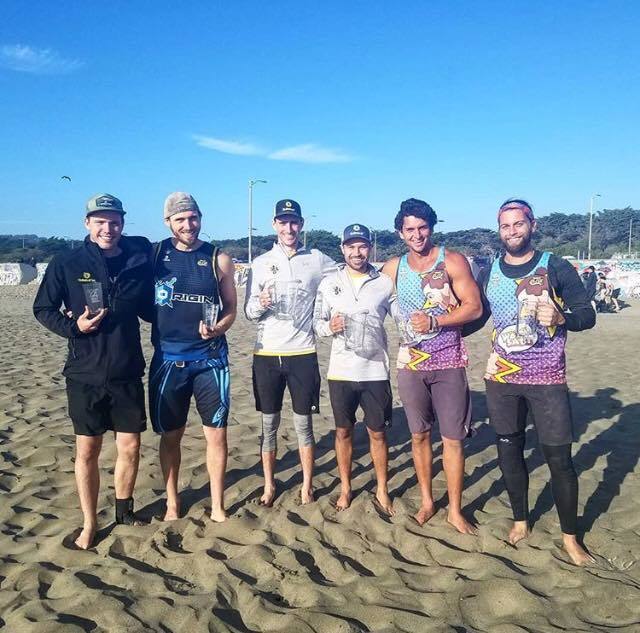 Five power ranked and 13 Premier teams came out to San Francisco. For this event, the 13-team power pool was seeded using the swiss-system. The 14, 15, and 16 seeds would go to the top finishers of the non-power pools. After pool play, these were the top 13 seeds.

Power pool play came with a few surprises. First, BULKY, who took first in the San Diego Advanced Division, came out strong and earned the #4 seed. Chicogo was also slated to earn the #3 seed but fell to SubPar Team, dropping them to #5. Lastly, Church Da 5'9" had not been seen since taking third place at the 2017 Nationals Advanced Division, but this Utah pair scored a win on SubPar Team in the first round and continued this strong play to take the #6 seed.

No upsets occured in the round of 64, but some matches headed into three games. One match that did so was the Premier team TnT versus the Czech Ambassadors (Jakub Mysak and Gabriela Mlcochova) who were visiting from Europe!

The round of 32 came with two upsets of Premier teams. The #22 seed Life Elevated (Anthony Oliver and McKay Hooker) was able to take out NorCal Gravity in two games to make their way into the top 16. Strong serving is what pushed Oliver and Hocker past Witt and Eberhardt. The #20 seed Tenda-nitus  (Carter Clem and Ryan Brennanalso) also beat the Rich Chigga$ of $pikeball.

Some interesting matches occurred in the round of 16. As expected, the match between the #8 seed Cho's Bros and #9 seed TnT was a close one, but the higher seed moved on in three. After falling to them in pool play, the lower seeded and power ranked Valley 'Dogs found more success in bracket play versus DaBR-metrics. Bertuccio and Gong took the series in two games to lock in their second top 8 finish of the West Tour.

Five non-Premier teams battled it out after the round of 16 for the title of "Breakout Baller" and a Premier qualification. At the end of the day, Sneaky Cheeks (Skyler Boles and Avery Wolfe) were the breakout ballers, earning Wolfe a qualification. A group photo at the San Francisco Tour Stop.

The other matches went as seeded and lead to these quarterfinal match-ups:

Wabi Sabi, Point Loma, and SubPar Team were all expected top 4 finishers and moved onto the semifinals with two game wins.

The last match-up between the newly-formed BULKY and mash-up Chicogo started off extremely one-sided. Chicogo went up to a 15-4 lead after some solid serving by Hornacek and slightly sloppy play by BULKY. At that point, though, Francis and Payer tightened up their play and Payer was able to successful land his serve. Chicogo took the game 21-18, but this 14-6 point swing by BULKY in the second half of the game is notable. Chicogo then took the second game 21-19 to move to the finals. BULKY may give other West teams like Valley 'Dogs and SubPar Team some trouble later in the season.

Boyer, in his first tournament since June of last year, struggled with serve returning. Boyer noted that serving skill has increased since last year and said, "I got my share of aces for the day but I also got my share of head scratches when someone hit a ball so far right or left."

This two-time National champ had plans to play SummerSpike with Skyler Boles but may have to back out in order to help with the ESPN production. When asked if he will play more in the future, he responded, "I also recognize that I can't compete like I used to and don't think I would be satisfied getting anything less than 1st so I'll humbly lurk on the sidelines."

This set up another Wabi Sabi vs. Point Loma Spike final, a match seen twice last month at the San Diego Tour Stop. Wabi Sabi won both of these matches, greatly in part to consistency in all aspects of their game. Rouse and Bies can both excel when this consistency is found. On this day, Point Loma was the team with the consistency.

Early in the match some hitting errors from Wabi Sabi gave Point Loma a small lead, but Ortega serving at 10-9 is when the first game took off. With a mix of good serves and good defense, Ortega served Point Loma to a 14-9 lead. Wabi Sabi took some breaks back but consistent hitting by Point Loma took them to a 21-17 win.

This first game win was huge for Point Loma's mentality. Ortega noted, "winning game one in pretty strong fashion allowed us to get past the mental block from the previous losses to them, and to believe that today was the day we were going to take it."

Game two was a close affair for most of the match. Wabi Sabi did not get much going from behind the 6 foot line while Point Loma did. Eventually with a mix of tough touches and trapping sets by Rouse and Bies, Point Loma converted some defensive touches and found a 19-16 lead. They held on to this lead en route to their first Tour Stop victory.

This win over Wabi Sabi was not a surprise to either team, though. Bies stated, 'they’re a really solid team and have been putting in work that shows in their current play." About why Wabi Sabi lost, he said, "they didn’t make many errors, we did.".

Ortega echoed this by saying, "we’ve played them both so close so many times that we knew we just needed to put it all together." Both Wood and Ortega emphasized that they felt fresh heading into the day and made sure to conserve energy for the finals. 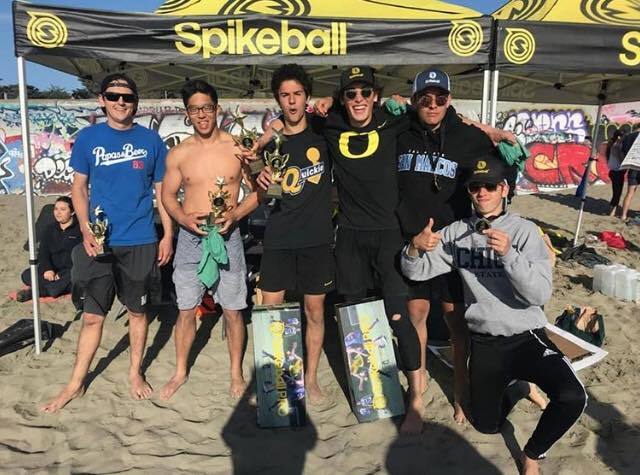 In the Intermediate Division, one side of the semifinals featured the expected #2 and #3 seeds Safe Sets and The Last Mohicans, respectively. Due to a series of upsets, the #8 and #20 seeds Registered Set Offenders and Got any Sheep were the other semifinals match-up. Registered Set Offenders and Safe Sets met in the finals with Safe Sets to take first place in their second tournament. The Last Mohicans defeated Got any Sheep to take third. 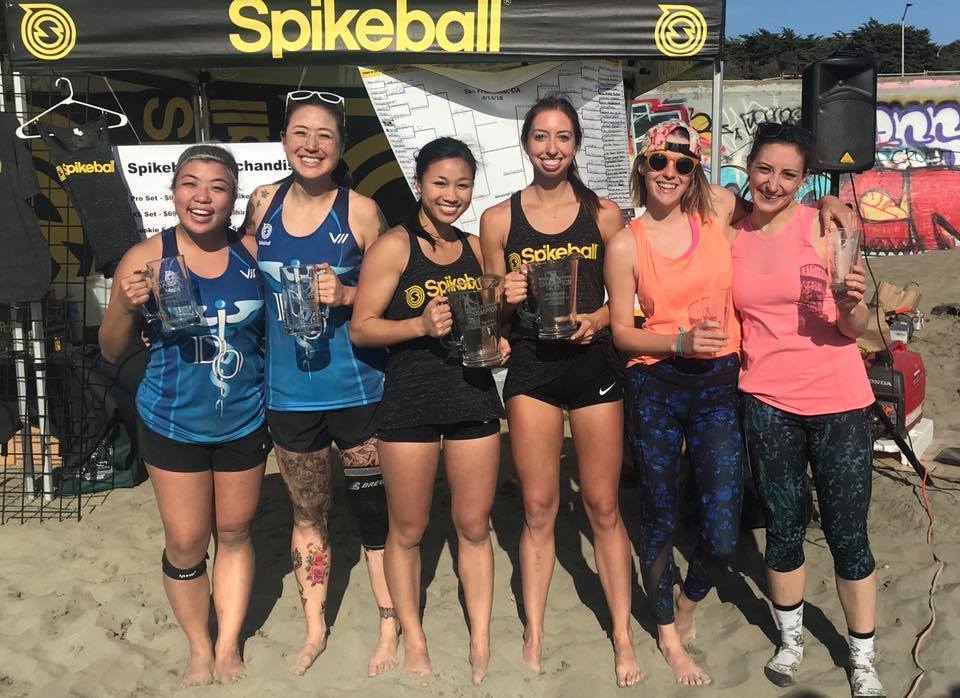 Doctor's Orders (Jackie Yoo and Tory White, second), See You on the Flip Side (Joelle Nguyen and Kayla Swayze, first), and Notorious D.I.G. (Kelly Marren and Marguax Foxworth, third) pose for a picture after the Atlanta Tour Stop.