Last fall, the 2017-2018 collegiate roundnet season began with the nine sectional tournaments held all over the United States. Now that spring is just around the corner, it is time to bring the collegiate teams back together. This Saturday features five of the nine Sectional Championships: Central, Southwest, Pacific Northwest, Tropic South, and Atlantic Coast. The other four sections (New England, East Bay, South Central, and Great Lakes) will be competing on March 24. 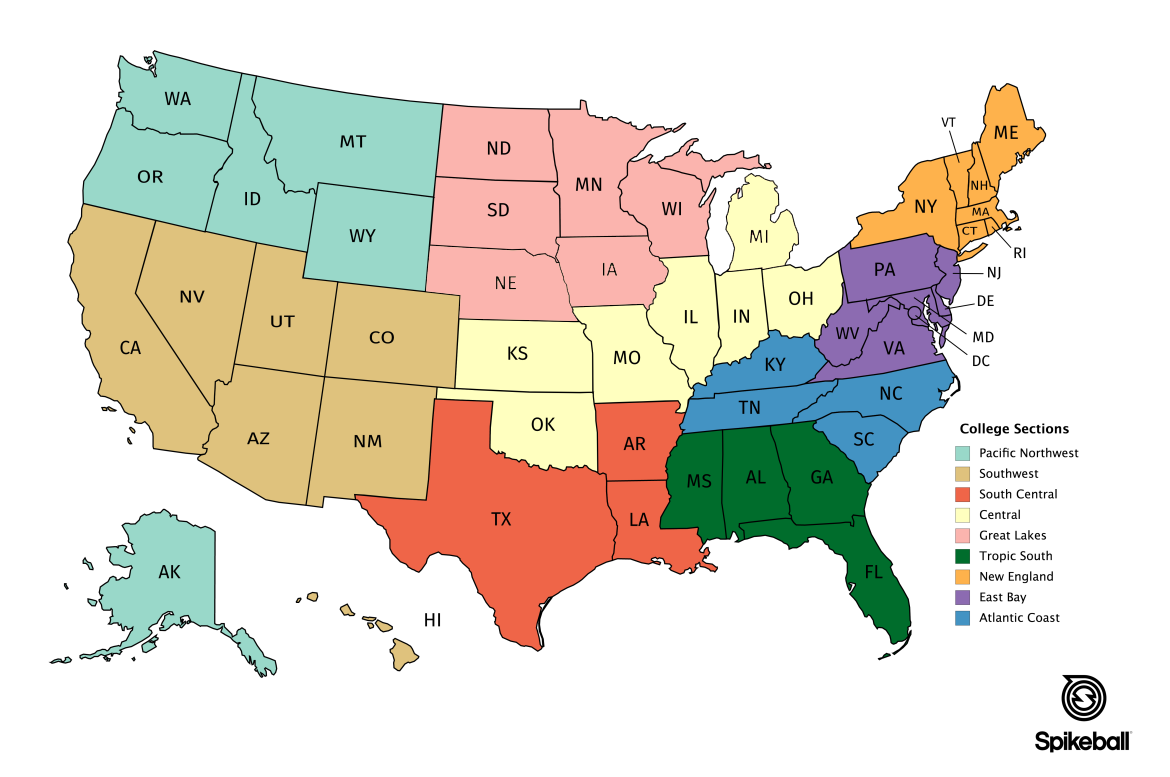 Let’s take a brief look at what to expect from each of the sectionals this weekend:

The Atlantic Coast section is home to the #1 school in collegiate roundnet, the Univesity of Tennesee Chattanooga (UTC). The #6 power ranked Easily Dug (from UTC) are the clear favorites in the individual division. Other top contenders include Lutz of Ferrari’s (Jeremy Lutz and Brenden Ferreria) of Clemson University, Butter (Forrest Boone and Connor Harte) of UNC Charlotte, and We only go Tilted (David Gonzales and Blake Davis) of UTC. As Easily Dug and We only go Tilted are the only two teams from UTC competing, the college division is open for Clemson University or Western Kentucky University to capitalize and earn a win. Andrew Card of Easily Dug goes to hit a ball at the 2017 Chicago Grand Slam.

After their break in 2017, the power ranked Schweppes (Micah Zimmerman and Jesse Showalter) will be making their 2018 debut at the Central Sectional Championship representing Rosedale Bible College. Winners of the Central Sectional fall tournament, Redbird of Illinois State University, will not be attending so Schweppes is the favorite heading in. They will be competing with a group of teams from the host school Ohio State University, as well as many single teams from different schools from around the section. Rosedale Bible College has a second team and will face off in the college division with Ohio State University for the spot of top school in the Central section.

Foxy Men (Murray Noble and Ben Van Vliet) of George Fox University took first place at their sectional tournament last fall and will be the favorites heading into this one. Not far behind is Mr. Clean (Nate Evensen and Aaron Glickman) of Western Washington University, who placed third at that tournament. Foxy Men is one of six teams that George Fox University is bringing to the event, giving them two squads in the college division. The host school University of Oregon has three teams of their own and will be looking to compete with them for the top college spot. Six California schools and one group of Arizona ballers will be competing in the Southwest Sectional Championship. The top 2 teams from the fall sectional will not be attending and the favorite looks to be the third place finisher and the #19 ranked team in college roundnet Newton Dogs (Ridge Bertuccio and Ryan Baillargeon). Their biggest competition should be Bertuccio’s partner on Valley ‘Dogs Alex Gong and his partner Robbie Brisco, who make up the Fwango State Bulldogs of California State University Fresno. Grand Canyon University (GCU) took first in the college division at the fall sectionals, but their top team Whift Cream will be missing, leaving them with two teams. University of California Los Angeles is the only school with three teams, but this does not mean the two teamed GCU, University of California Santa Barbara, or Cal Poly SLO will be out of the running in the college division.

One current power ranked team, #18 Recrem (Gustavo Gonzales and Karry Nusbaum),  resides in the Tropic South section. Recrem is from Mercer University and took first place at the Tropic South sectional tournament last fall. Their biggest threat (in both the individual and college divisions) is the University of Georgia (UGA) who is bringing a whopping 10 teams to the tournament. The UGA Black squad took first at the college division at the Tropic South fall sectional and the school will certainly be looking to repeat.