Note: This piece was written by Ezra Dantowitz.

This past Saturday marked the first big East tournament of the season: The Pitt March Madness Tournament. With winter still brewing outside, the tournament was hosted at an indoor turf facility on the University of Pittsburgh’s campus. Many of the 23 teams came from Pennsylvania, but the field also featured players from New York, Ohio, Maryland, Illinois, Massachusetts, and Georgia.

There were three pools including a power pool of 7 teams. In addition to #3 cisek_showalter and #10 Ohio Against The World (OATW), the power pool featured players from the fourth, seventh, eighth, twelfth, and seventeenth (and previously eighth - Nashburgh was removed due to injury) ranked teams in the country. Power pool play finished in the following order, with each team beating all the teams ranked below them.

*Rizky Rolls did not actually play in pool play, but was given the 7 seed. Ben Dantowitz got a flat tire on the drive down to Pittsburgh and didn’t make it to the field until just before bracket play.

Cisek_showalter looked comfortable in pool play. Their only win by fewer than five points was against Fitzgerald and Weiler. Showalter’s serves alone - which were described as “somehow legal” - provided enough breaks in most cases to win.

Most surprising was probably Drucker and Wilson’s slow start. They had three close losses, but couldn’t get enough wins to avoid a possible semifinal meeting with cisek_showalter. 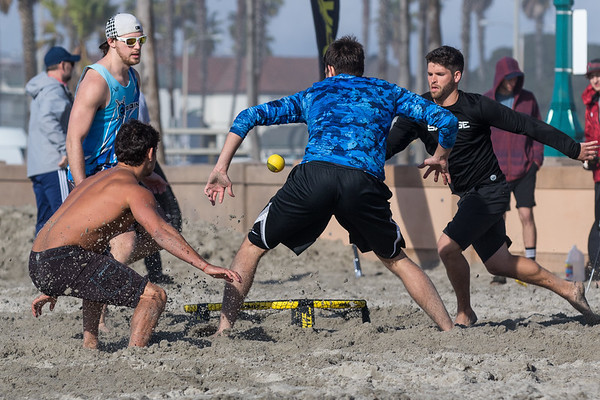 Patrick Drucker winds up to hit a ball in San Diego last month.

There were no notable upsets in the first two rounds setting up the predicted quarterfinals:

Despite getting the win in pool play, Frisky for Nuggets was no real match for Ernesto and His Friend. Drucker controlled the game with strong serving and despite some scattered breaks, there was no real challenge from Dantowitz and Zagone.

Cisek_showalter and OATW also won in two, bringing everyone’s attention to the match of the tournament: It takes two to Fwango v. Rizky Rolls. Coming in without pool play, Rizky Rolls cruised through their round of 16 game to find themselves up against two top 25 players in the quarterfinals. After dropping game one, their chances did not look good in game two. It takes two to Fwango went up a few breaks early and was starting to feel a little comfortable. But then, trailing 14-15, Dantowitz aced Weiler and Fitzgerald back-to-back on a huge fwango (it only took one) and a drop to take the lead 16-15. Both teams were able to hold on their next four opportunities giving Rizky Rolls a game point at 20-19. Weiler got a solid return, but rimmed his hit, sending the series to game three.

The first 15 points of game 3 made for one of the most exciting starts of any game in recent memory. It featured long gets, great hands, rallies, and - as any game with Fitzgerald does - ridiculous sets. Vinny Bonta even exclaimed from the crowd, “Who says roundnet’s dead?” It takes two to Fwango again took an early lead and was up 10-8. After a hold, Rizk got back-to-back aces to take the lead 11-10. Dantowitz had a great defensive hand on a Weiler hit a few points later to go up two breaks, and then a strong serve from Rizk led to a third break. A combo of strong offense from Rizky Rolls and missed serves from Fwango shut the door on the match as Dantowitz and Rizk won 21-18.

In the semifinals, cisek_showalter again powered through their opponent in two games. Showalter’s serves left Drucker and Wilson running around just to get returns. Even with Drucker’s strong serve it really was no contest.

On the other side of the bracket it was much closer. OATW was poised to close out game one when Rizk put a side-step serve clean past Showalter to knot it at 20-20. Rizky Rolls got another break for a chance to win the game, but couldn’t convert. Bonta’s strong forehand ripped through Dantowitz and Rizk to give OATW game one. Game two was again close, and after going into extras Rizk put a forehand clean past Bonta to win 26-24. But in game three, OATW was the more consistent team. After relying heavily on serves, Rizky Rolls was unable to find breaks and Bonta and Showalter advanced to the finals 21-18.

As they did the rest of the day, cisek_showalter looked comfortable in the finals. There were some rallies, but those mostly consisted of OATW scurrying to get the ball back to the net while Cisek and Showalter waited for the chance to return a hit and put it away. Though serving again led the way, cisek_showalter showed their well-roundedness with some quick, impressive defensive plays. Neither game got out of hand, but it looked like Showalter and Cisek could’ve kicked it up a gear if they felt challenged.

In the third place game, Ernesto and His Friend redeemed their day with a three-game win over Rizky Rolls. 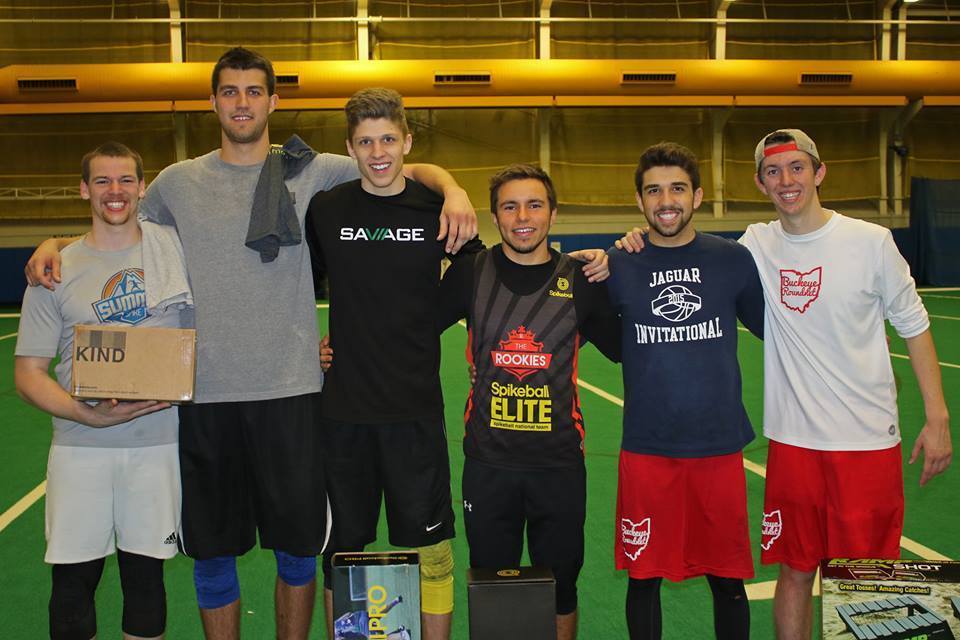 The Pitt March Madness Tournament podium with cisek_showalter in the center, Ohio Against the World on the right, and Ernesto and His Friend on the left.

At the end of the day, cisek_showalter was the best team there - as everyone expected them to be. Though they outclassed the field all day, the real test lies ahead on the other side of the country. The San Francisco Tour Stop on March 18 will provide them a chance to face off against the other top five teams in the country. As two of the most natural and powerful hitters in the game, their skills were on display in Pittsburgh, but they’ll be tested by the West. Moreover, they’ll need to really play defense if they want to win it all.

One thing was clear: serving still dominates in the East (and the Midwest for that matter). Serve returns were weak all day while serves were strong. Akin to last season, serves might be enough to win a tour stop or two, but they won’t be enough to win Nationals or end the West’s dominance.

Got something related to roundnet that you want to know more about? Want to get involved writing previews or recaps for tournaments near you? Contact Mike White at mwhitey17@gmail.com or @mwhitey17 on Twitter.