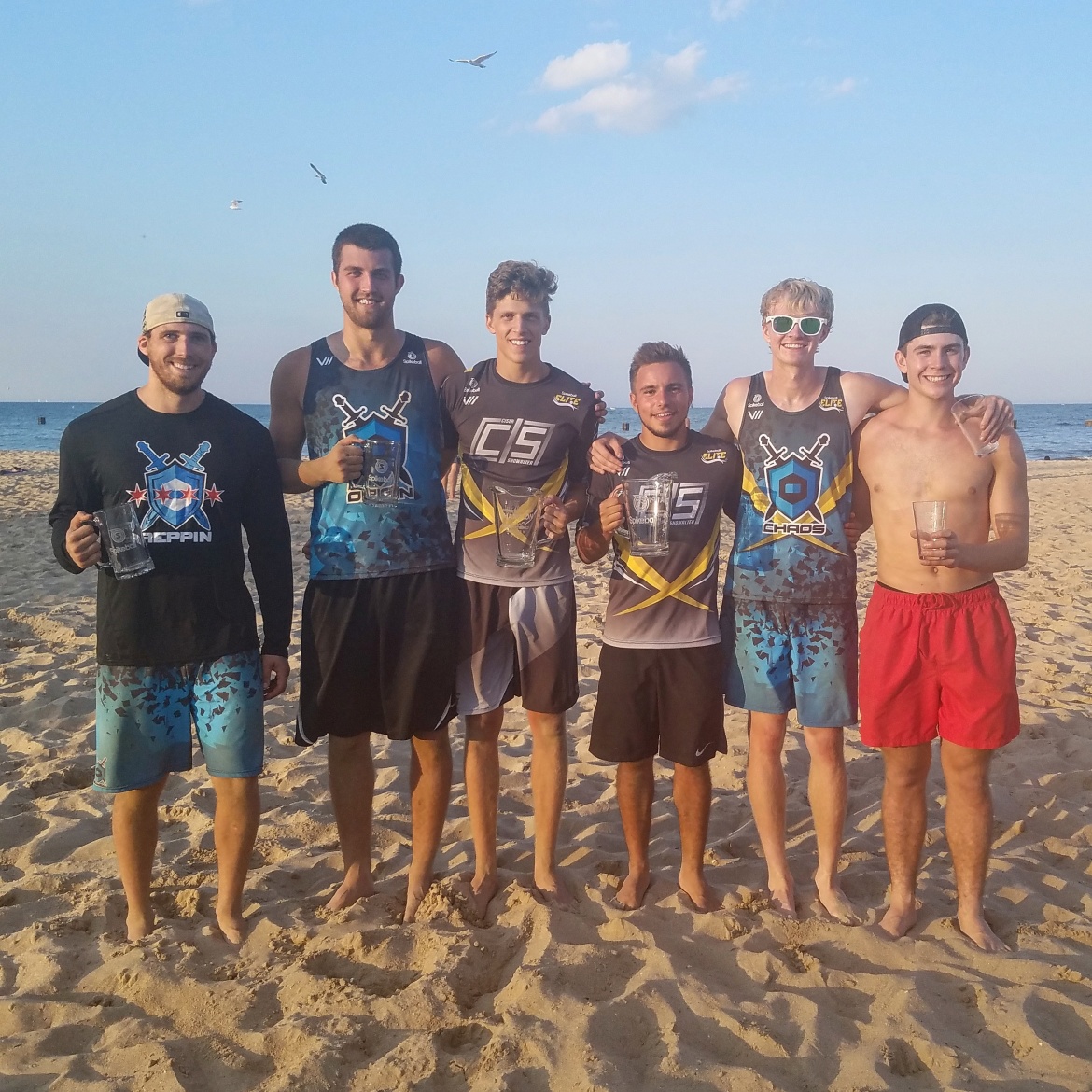 For the second year in a row, Peter Jon Showalter and Tyler Cisek are Spikeball® Roundnet Association Regional Champions.

Of course, the pair did not win last year’s titles together. Instead, Showalter took first in the Southeast while Cisek won East Regionals. Since combining forces this year, cisek_showalter has found almost nothing but success and their Midwest Regionals win was no exception.

Heading into the day, cisek_showalter’s biggest threat was Origin Impact (Chris Hornacek and Patrick Drucker), although it is becoming difficult to use the term 'threat' as cisek_showalter was 5-0 against them heading into Saturday. Despite the lack of wins, Impact has continued to challenge Cisek and Showalter using Drucker’s strong serve and consistent serve returns from both. However, after Saturday, cisek_showalter is now 7-0 against Impact in 2017.

Impact struggled in the morning and ended pool play with an unexpected 1-3 record, giving them the #6 seed. This was most unfortunate for the #3 seed Ohio Against the World (Vinny Bonta and Jesse Showalter) who were given a first-round match with the #4 team in the nation.

In that winner’s quarterfinals match-up, Ohio Against the World (OATW) came out strong while Impact looked as sluggish as they did in the morning. OATW took game one and forced Impact to wake up and take the second.

Moving into the third game, there was tension and excitement surrounding the potential upset. Drucker had other plans. In this third game to 21, Drucker recorded roughly eight aces, all hard and well angled to the returner's right hand, which helped Impact to a 21-14 win.

Cisek_showalter defeated Tetelestai (Logan Cornelius and Jesse Throw) and then awaited Impact in the winner’s semifinals. Like we’ve seen before, this was a serving and power battle. Drucker’s improved serve blasted by cisek_showalter many times while Showalter found success in his wide-angled fwango.

The dynamic of the match is summed up well by this late game one sequence:

Cisek_showalter kept that serving momentum into game two and won 21-16, making them 6-0 on the season against Impact. This put them in the winner’s finals. 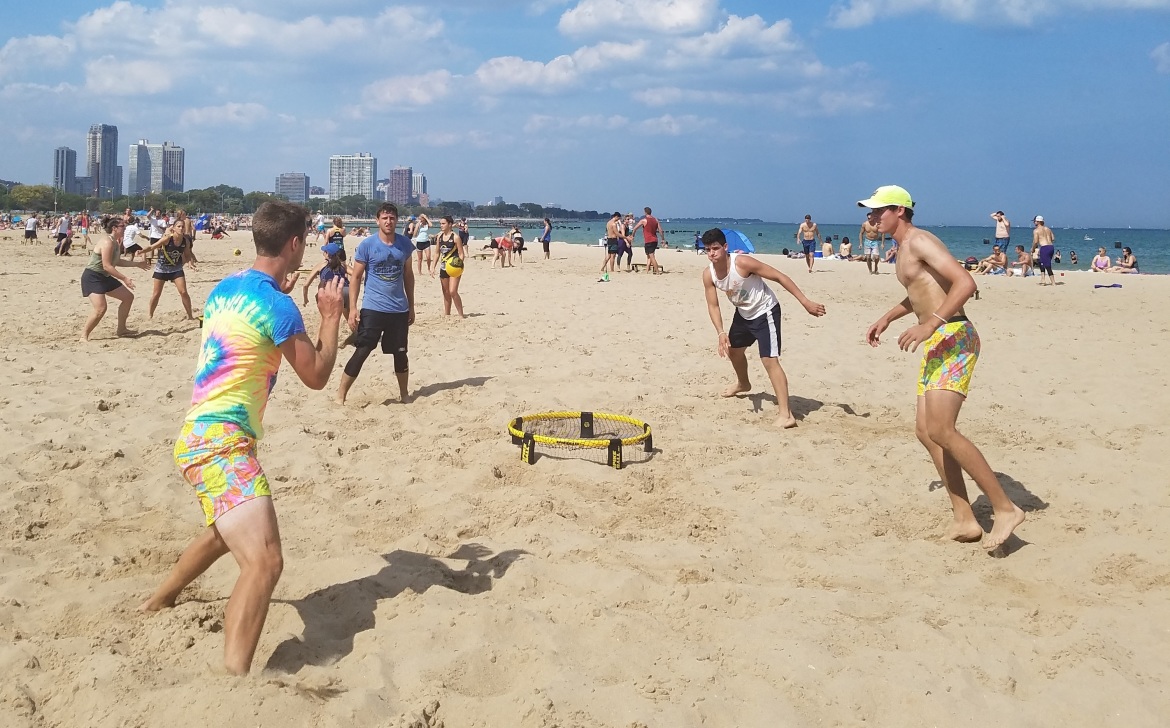 Living Weirdos and The Brothers Zimm face off at Midwest Regionals last Saturday.

On the other side of the bracket, the predicted third-place finisher Coming Out of Retirement (Ryan Weiler and Joey Hafertepe) racked up wins after a solid pool play outing. Weiler is a highly-skilled player and half of Origin Chaos while Hafertepe is a solid free-agent from Origin Roundnet Club (he also claims to be "retired").

Their day started strong with a win over Impact and an unbeaten record en route to the #1 seed. Their first two matches came without much stress as they took out The Brothers Zimm (Micah and Josiah Zimmerman) and Origin Force (Sam Hynes and Kurt Dolson) with reliable serves and defense. Weiler and Hafertepe cruised into the winner’s finals and secured a top 3 finish early on in the day.

Cisek_showalter versus Weiler and Hafertepe played out slightly different from their match with Impact. Weiler and Hafertepe both challenged Cisek and Showalter with their serves and defensive touches were plentiful from Weiler. Unfortunately for them, Showalter’s defensive touch count was just as high. The mash-up played the #1 power ranked team tight but fell in two, 21-19, 24-22.

OATW matched up with Tetelestai after their loss to Impact and fell to them for the second time in as many tournaments. Tetelestai went on to play Force, a team they had double-eliminated in Columbus. Hynes and Dolson got their revenge this time and moved onto top 4 with a win over Tetelestai.

After their loss to cisek_showalter, Impact went on a tear in the loser’s bracket. First they took out The Brothers Zimm (Micah and Josiah Zimmerman, finishing at T-5th) before eliminating Force at 4th. Impact moved into Loser’s Finals against Weiler and Hafertepe.

At all three official tournaments in 2017 in which Weiler has played with another Origin member, he was eliminated by Impact. Midwest Regionals made it 4 for 4.

Similar to Strange Embrace and 2 Guys, the familiarity of play for these four Origin members led to a different kind of match, one filled with better serve returns and reads than usual. Weiler and Hafertepe took game one and had multiple match points in game two. After a few failed attempts at closing out the series, Hornacek found two defensive touches in a row and forced a game three.

In game three Impact found two breaks (this time on hitting errors) at 16-16 to win 18-16 and move onto grand finals.

Game one of the grand finals felt like a flashback to cisek_showalter and Impact's match-up earlier in the day. Drucker found huge success with his serve, which led Impact to a decisive game one win. After that, cisek_showalter’s play picked up and Impact's faltered a bit. The serve returns, sets, hits, and, of course, serves from the #1 team in the country proved too much to handle and the championship was theirs not much longer.

Cisek and Showalter both claimed a regional title last season. Even more impressive, though, is that Showalter also claimed the 2015 Midwest Regional title and has now won three total, each with a different partner. The real question is: will these players earn their first national title next month?

The full results from the Premier Division:

T-7. Ohio Against the World, Yummy 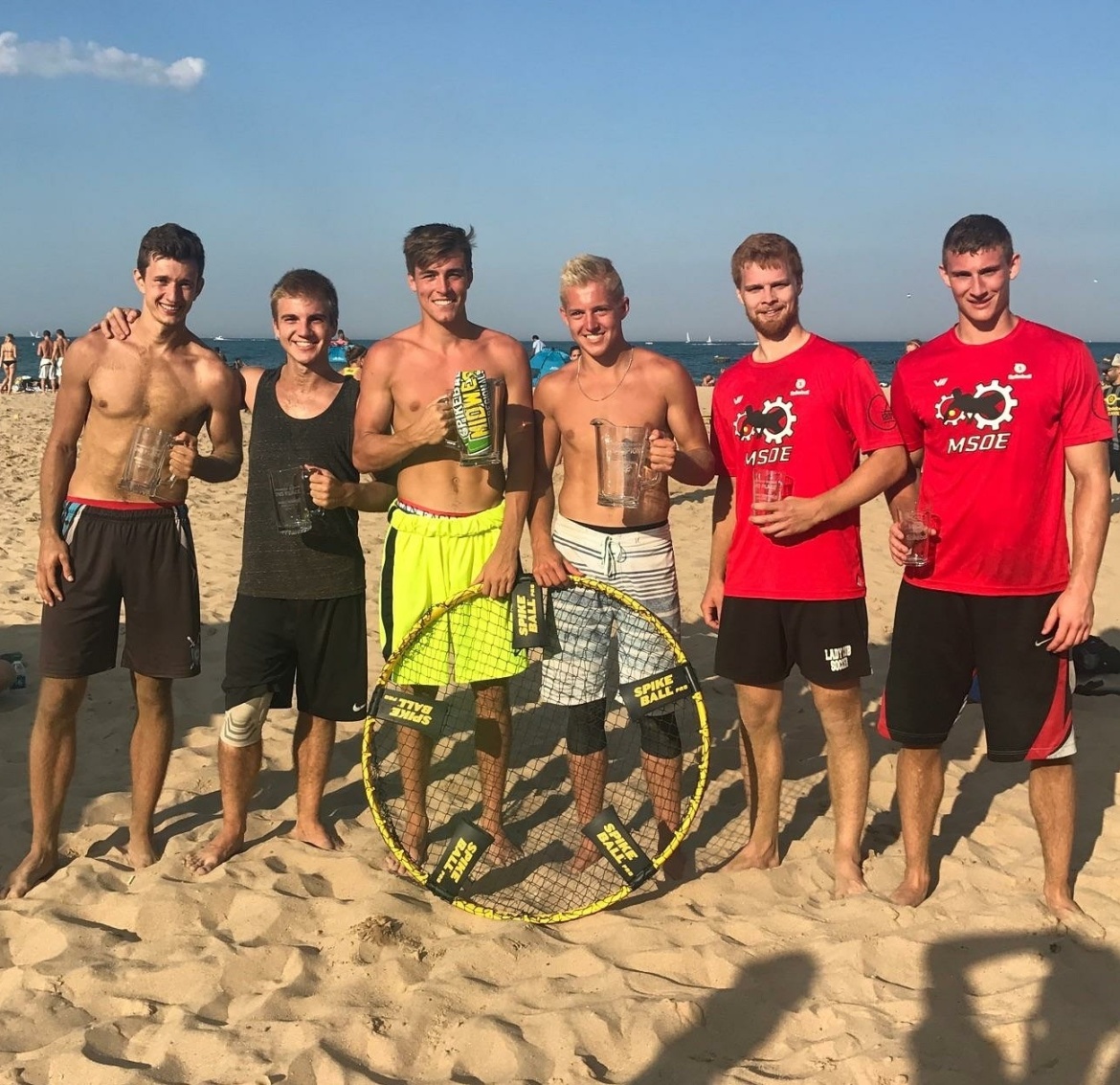 The Advanced Division at Midwest Regionals was a difficult one to gauge heading into the event. And, as expected, there were some unexpected results.

Without power pools, close wins and point differentials mattered massively in getting favorable seeds. Shorewood Tennis, featuring Sleeper Picks’ Joey Pierron as well as Cal Papineau, rose to the occasion and took the #1 seed with a huge point differential. The #2 seed went to the other half-Premier team in Advanced, Genies in a Bottle (Michael Zagone and David Aschenbrenner).

These two and the other top 8 seeds all held until the quarterfinals which led us to these match-ups:

For the most part, seeing these teams place top 8 was not much of a surprise. Although not well known, Flight (Brad Hotovy and Hunter Greer) placed T-17th at the Chicago Grand Slam after taking a game from eventual second-place finisher Golden Set (Harding Brumby and Eric Zishka).

The biggest surprise to me is MKE Skoes Bros (Dylan Meyer and Jonathan Schmitz), who have not attended an SRA event in two years according to SpikeballRoundnet.com. I expect the pair does train with other Milwaukee ballers, though.

The upsets began here, with Genies in a Bottle being the only higher seed to win their quarterfinals match-up. With Zagone as the sole Premier-level player in the Top 4, all seven others earned Premier qualifications.

With a strong day to supplement their game win over a power ranked team last month, I am excited to see what Flight does going forward. 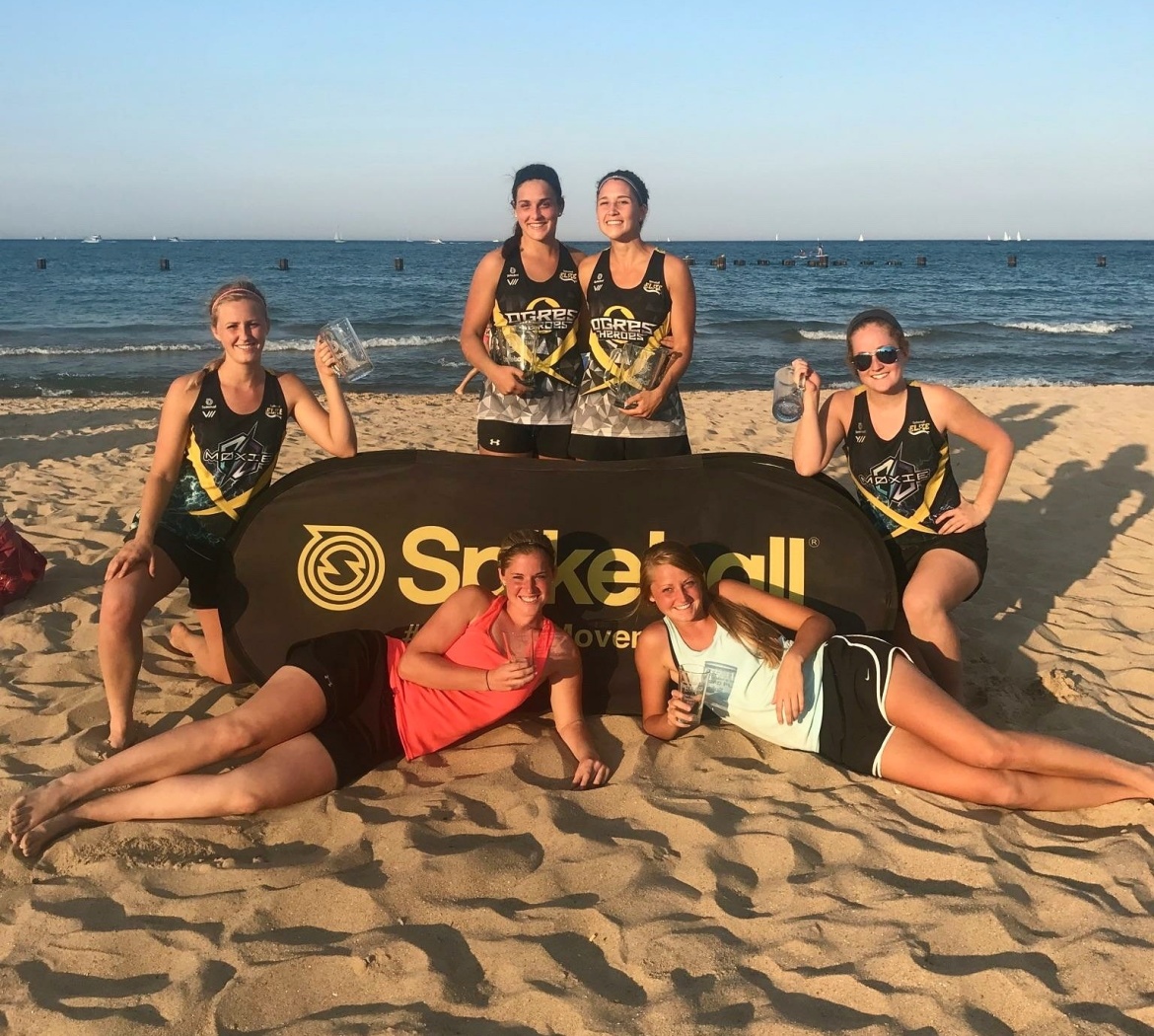 Ogres Heroes was the favorite going in. On Saturday, their biggest opponent was MØXIE (Jenna Coleman and Julie Haselton), a pair that registered a disappointing second-place finish at West Regionals, but a pair that has also given Kauffman and Witmer trouble in the past.

Before Saturday, Ogres Heroes had only lost two sets in 2017, one to veinte hamburguesas (Tori Farlow and Charissa Wright) in Baltimore and one to MØXIE in Santa Monica. At both of these events, however, Ogres Heroes was still able to win the tournament,

This time around it was the same story. After earning the #1 and #2 seeds, both teams ran through the winner's bracket and met in winner's finals. MØXIE kept it close in game one and sent it to extra points, but Ogres Heroes was able to take that one and game two as well.

MØXIE then defeated the third-place finishing Wingin It' (Krista Shrock and Annelise Rohrer) from Ohio to square up a rematch again in grand finals. This grand final caught the attention of many spectators.

The entire match (or matches) lasted over an hour, as the two teams battled back and forth. MØXIE found some hope with a game one win. Ogres Heroes took game two right back, but MØXIE generated a small lead in game three and held on to take the first set.

As this was double-elimination, another set would be played. Unfortunately for the fans rooting for an upset, Ogres Heroes won in just two games. 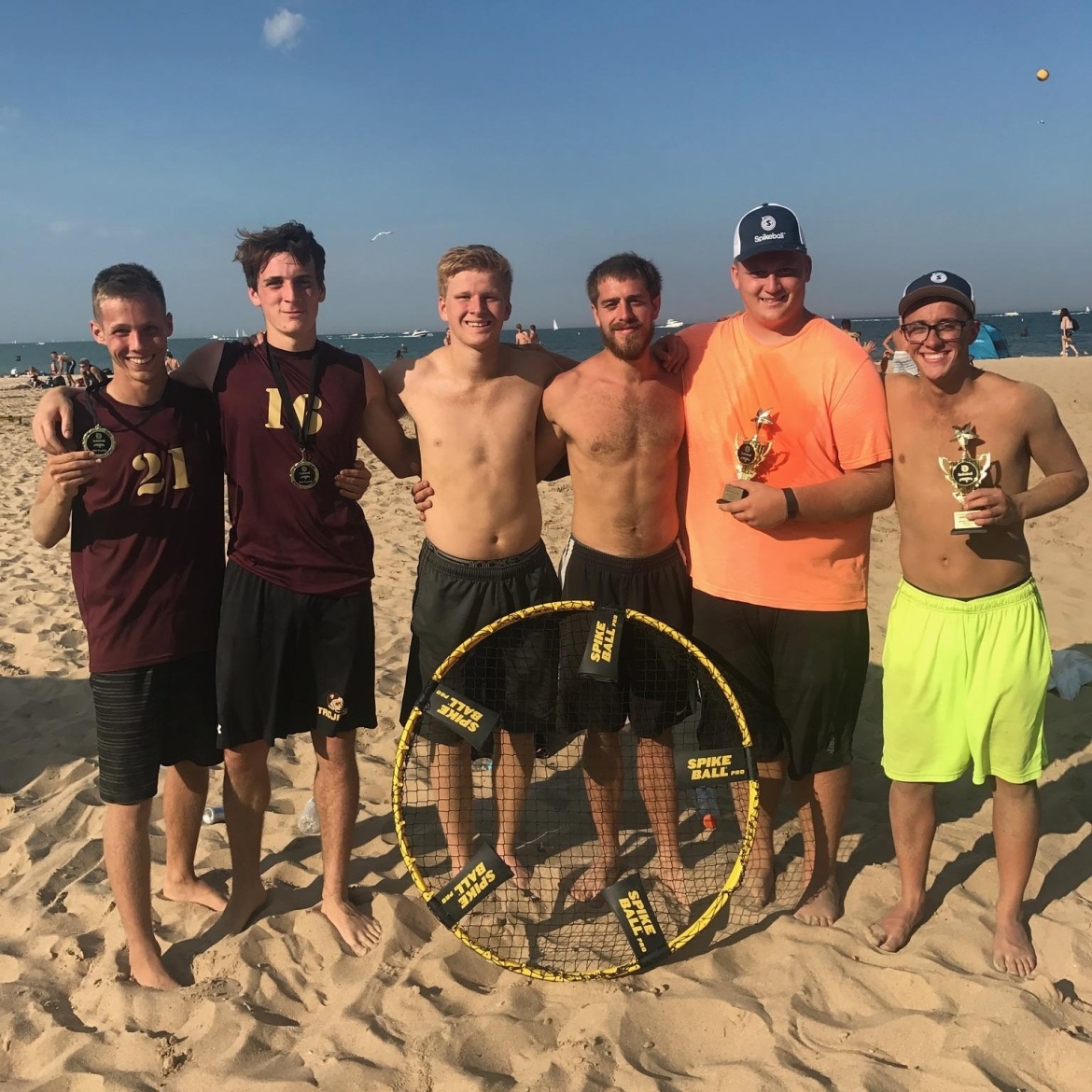 SC Amateurs (Cody Figus and Mike Giordano) took first place in the Intermediate Division after defeating Blue Goose (Aaron Cunningham and Daniel Gustas) in the finals and Spikeological Warfare (Mason Witt and Sam Teal) in the semifinals. Runnin Wild' (Ben Raffin and Henry Weinberg) fell to Blue Goose in the semifinals but then finished the day with a win over Spikealogical Warfare in the third-place game.

T-7. Ohio Against the World, Yummy